There have been a number of textile related incidents this month. Actual weaving has ranged from the individual through to hand production weaving in a mill to larger industrialised mills. I will keep them in the sequence that they occurred rather than trying to sort them out in theme. These are the highlights.

I was very pleased to have found another hand weaver.  Mάire Ni  Thaidhg has an long established studio at the Spiddal Craft and Design Centre on the Galway coast. She weaves on 4 shafts with an emphasis on colour.

One of the major highlights was a visit to Thomas Ferguson Irish Linen, at Banbridge. It was very lucky that we made contact via email to arrange a tour as they would have been on holiday a week later. I was provided with a wonderful comprehensive tour including both information on the company and history of linen weaving in Ireland. Of course it was the looms that I had come to see. In addition I got to speak to people on the floor: weaver, designer, sewer and cutter. http://www.fergusonsirishline.com 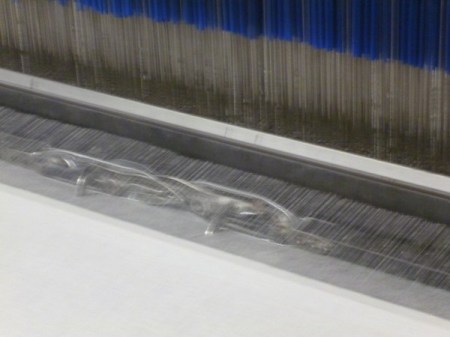 While in the area, a visit to the Lisbun Linen Centre was also made.  It had a well presented display with all the steps well set out. There were also some beautiful linen fabrics. http://www.lisburncity.gov.uk/irish-linen-centre-and-lisburn-museum

The area around Donegal provided an interesting mix of weavers. I met another hand weaver.  Clare O’Presco was a delightfully enthusiastic weaver. She specialises in weaving with colour and uses a 100 year old loom. She provided me with a day’s activities in hunting down a number of weavers and weaving establishments in this area. http://www.designdonegal.com

The Donegal Carpet factory in Killybegs has apparently the longest loom in world at 42’. Carpets were hand knotted. Unfortunately the mill is no longer in full production but rather carpet is being woven by volunteers. 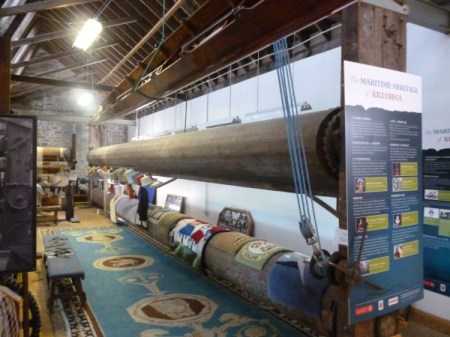 Donegal Weaving Studio had 4 looms + a very wide loom (3m). I spoke to John Heena. He is one of 3 weavers. 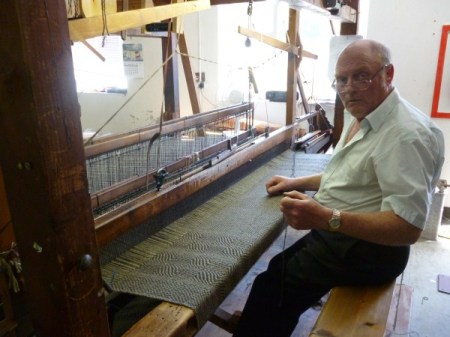 Sometimes driving one comes across some unexpected gems. This was the case with the “New Mills” near Letterkenny. The “corn” mill was there first and was used to grind oats for about 100 years. The second mill, used for processing linen was built when the demand for linen increased for the war. It was only in production from 1945-55. Apparently flax mills were often positioned beside grain mills so as to use the existing infrastructure of mill ponds and races. The original corn mill was in working order though the flax mill due to dangerous working processes is not. It was not uncommon for workers to suffer serious injury and in those days the workers may have been fined for loss of production. I discovered an interesting fact: to bleach linen, the fabric was soaked in a mixture of buttermilk and potash and put on the grass to process.

Lochcarron provided another mill experience. Unlike any other weaving establishment I have seen so far, Lochcarron is undergoing massive expansion with its productivity being up 80% in the past year. What was a family business has been taken over by a South Korean company. In this case the new company is recognising the value of tradition with the core business still being maintained: that of weaving tartans. Mill tours are available Monday to Thursday.  www.lochcarron.com

There was much of interest here but it was a piece of information that I acquired that has really grabbed my interest. These are rapier looms. Weaving on a rapier loom usually results in a fringe at the edges as each weft is a single thread, not connected to the next. Lochcarron has an attachment that I was told does a “tucked in selvedge” on fabrics with the weft being trimmed in the one process. On close examination one may with close attention notice the cut ends just over a cm from the edge. This has resulted in a massive increase in time efficiency as it has removed the need to hand manipulate the edge as these edges form the hem of a kilt. What is exciting me is that on analysis of the structure, this technique has potential for a hand weaver where there are many colour changes.

A visit to Stirling Castle provided a chance to see the Unicorn tapestries. Unfortunately the workshop wasn’t active. There was however a tapestry on the loom with an attendant who would explain the process. 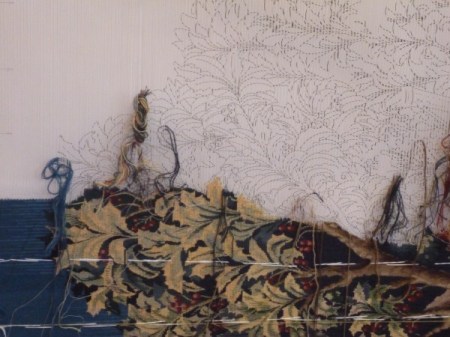 Andrea and Roger of “Skye Weavers” are in the process of setting up a croft style weaving studio. They are weaving 4 shaft fabrics on this pedal powered rapier loom. It is very similar to other rapier looms in the mechanics but rather than being powered by electricity, the weaver sits and pedals. This loom is also narrower in depth and can fit through doorways, a feature I was told that is common to other pedal looms which may be found on Harris for croft based industry. www.skyeweavers.co.uk. 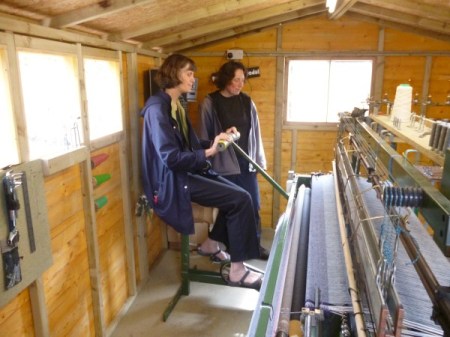 On this trip and other previous ones, I have visited a number of castles and stately homes where woven silk has been used as a wall treatment. In most cases photography is not allowed so I have been unable to record many examples. The last occasion was at Alnwick Castle. As in other places enough fabric has been recovered from behind skirting boards to enable a reproduction of the original fabric. The original Milan silk was installed in 1754 and in three rooms has been replaced over the past seven years. Humphries, UK have woven the reproduction. It was however a discussion with a guide that provided an interesting gem of information: how the silk is installed. Fabric widths are sewn together. In the case of the Drawing Room eight were stitched together. These are nailed at the top with small tacks. The fabric is allowed to hang to enable the length to stabilise (a fabric will “drop” or stretch till it reaches a point where this will happen no more) and ensure. This ensures it will always lie flat. It is then tacked at the sides and hem. Skirting boards and the like are then reinstalled. Glue is never applied. It would mark the silk and in times past, tacking of the silk enabled it being able to be removed along with all furniture and furnishings and even the widow glass when the family moved from residence to residence. http://www.alnwickcastle.com 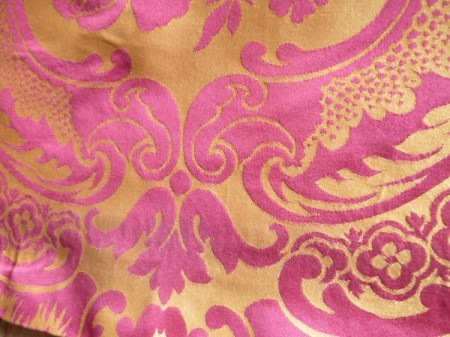